I love to tell a story,a moment in time or part of an ongoing narrative.Observations of my life and the lives of others work their way through my painting.Dreamscapes linking the viewer betweentwo worlds,a rendering in paint of the collective subconscious,a window into our deepest desires
and fears.
YouTube Link here ... 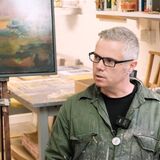 I studied Illustration and Printmaking at Duncan of Jordanstone College of Art Dundee graduating in 1993 and worked for a number of years within the Design school teaching Illustration and Life Drawing.

As an illustrator i have produced works for clients such as The Scotsman Newspaper,The Glasgow Herald ,Macmillian Publishing, Adobe ,The Bank Of Scotland ,The Leith Agency and Theatrum Botanicum.
In 1997 i was asked by the Open Eye Gallery in Edinburgh to have a solo show of my paintings which has led to seven solo shows with the gallery. I have exhibited throughout the United Kingdom with galleries such as John Martin Of London,The Portal Gallery London and The Medici Gallery London.
Since 1997 i have regularly exhibited work at The Royal Scottish Academy in Edinburgh and The Royal Glasgow Institute Of The Fine Arts and have been awarded the following awards from these bodies.

The City Of Glasgow Award , Royal Glasgow Institute Of The Fine Arts

Sekalski Award for Printmaking ,Duncan of Jordanstone College Of Art


My work is held in many private collections throughout the UK and abroad including the actor Kate Winslet ,director Sam Mendes , The Walter Scott Collection ,University of Dundee and The New Victoria Hospital London.
If you are interested in any of the work on this site or in commissioning me for Illustration projects and paintings then please use the contact form.